Modern application and workloads are much more demanding in nature and getting liberated from the clutches of legacy layered stacks. The evolution of the compute following data, runtime execution of code and dynamic assemble of IT infrastructure resources making everyone rethink on their strategies of application deployments. Each and every element of the ecosystem is getting challenged to solve the issues learned in the past. Be it availability, scalability, multi-tenancy, security, integrity etc of the workloads running from any location, cloud, edge around the globe.

It is really a testing time of the underlying infrastructure that provides compute, memory, storage and connectivity (read, bandwidth) and testimony of the deployment solutions thereof. The emerging questions that needs to be answered are...

Can I run my workloads on infinite infrastructure?

How can it scale vertically, horizontally and seamlessly across multiple clouds and locations in a distributed manner on demand?

Can it do this without compromising on the performance and run efficiently?

Will it be cost effective and simple enough to manage?

These questions will keep many thinking, anyway let's try and simplify what it means and how it can be deployed. Two key principles are hidden in this problem, the scalability (read, scaling out architecture) and the convergence ( read, scaling together architecture)

What is Scaling out architecture?

A scale-out architecture is typically software-defined and commodity-based, and the compute, storage, network resources and orchestration mechanism remain separate and might run entirely on a separate hardware, yet integrated be able to work together cohesively, without need for downtime or transparent towards reconfiguration while it actually scales out and each component remains distinct and must be independently scaled up or down depending upon the workload demand. Once this approach is crystallised into a strategy it is called, Hyperscale. The very fact that any resource can be abstracted from other seamlessly provisioned and scaled independently via this architecture makes it popular choice for distributed systems, grid computing, big data and analytics use cases, most of these deployments warrant deeper understanding, manageability / self-service and deliver workload optimization by design.

What is Hyperconverged Architecture?

On the contrary, the scale-out architecture where compute, storage, network, resources and orchestration mechanism / components are tied together as a pretested, pre-integrated platform and served as a single solution where components are still distinct in this architecture yet respond to the workload demand and can be upgraded as a set of resources in step by step fashion is simply, Hyperconvergence. This approach is an effort to reduce data center complexity and increase scalability getting modularity as a leverage. 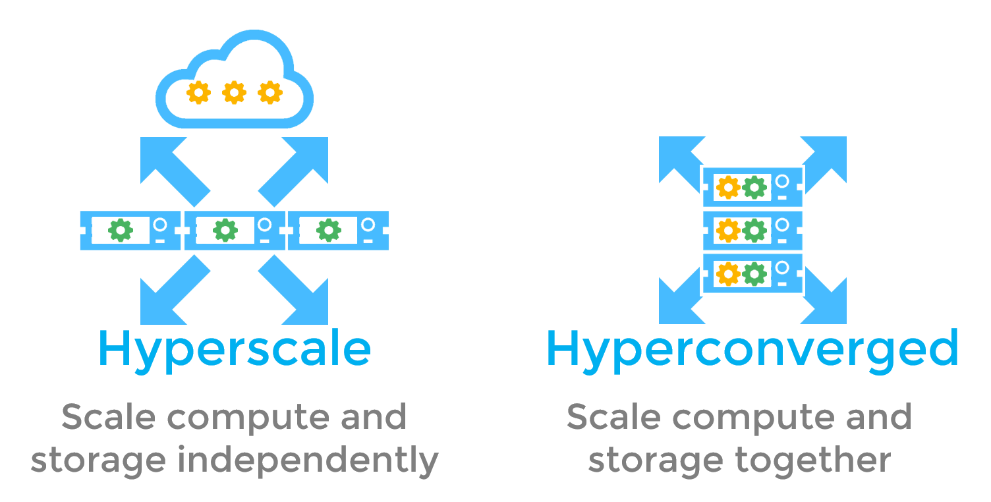 In a hyperconverged environment, the components can't be separated; the software-defined elements are implemented virtually, with seamless integration into the hypervisor environment. Ideally most of the providers bundle these systems as an appliance, building blocks or a reference architecture, or as a software-only model. The value differentiation includes bundled capabilities such as deduplication, compression, data encryption, redundancies, modularity for scaling, snapshots etc delivered as a wholesome product feature / functionality set as a fully managed platform.

The key benefit and trade-of is simplicity vs flexibility, use cases might differ and might not even be relevant as the tech stack is undergoing major transformations such as containerization, function as a service etc for distributed applications thus it is relevant to assess what is best for you. It is good to assume that Commodity-based and software-defined, hyperscale infrastructure picks up where hyperconvergence leaves off. All the big boys of the social media and internet thrive on hyperscale architecture and we are witnessing the enormous amount of growth no one has ever imagined but is now a reality.

What is the future of HCI ?

Fundamentally, for a graceful growth without disruption many enterprises are looking at HCI systems which are modular, integrated and provide cloud like multitenancy, faster workload provisioning, fewer intricacies (want ready to cook meals!!) and inbuild expected performance and efficiency as it comes bundled with features, compliances ready and enables faster recovery from failures etc. On scalability aspect, Hyper-convergence allows scale in two ways. First, in-chassis upgrades, such as adding storage, allow each node to grow. Secondly, you can expand by adding additional nodes into the current environment.

Performance from hyperconverged appliances is usually greater, with the tight cohesion between integrated components providing real and lasting benefits. Disaster recovery, meanwhile, is easier to control and manage, with hyperconverged environments benefiting from integrated data protection and backup, with the ability to replicate and fail over to alternative nodes in the event of a major issue. This works out as your private cloud environment balancing best of both worlds, i.e. cloud computing and compliance. Gartner predicts the market for hyperconverged integrated systems (HCIS) will reach nearly $5 billion - or 24% of the overall market for integrated systems - by 2019, as the technology moves toward more mainstream use.

What is the future of Hyperscale?

Hyperscale is a much more suitable architecture for elastic workloads, especially Hadoop, Cassandra, and other NoSQL flavours. It's also a better platform for building out elastic clouds with technologies like OpenStack or Docker. Simply put hyperscale drive the cloud of today and set for tomorrow as more and more businesses decide to give up owning their own data centers and migrate their applications to cloud platforms. By 2020, 47% of all servers sold are expected to go to hyperscale customers or to the development of large-scale, cloud-ready, hyperscale data centers as trend is evident their numbers will swell from 259 in number at the end of 2015 to 485 by 2020, according to Cisco's report. This will no doubt foster and lead the key digital transformation trends such as Artificial Intelligence, Machine Learning, Bigdata, Analytics, Smart cities / IoT etc and mainly cloud computing complimenting distributed data processing principles.

Developers like Self-service access to infrastructure provisioning, API-driven , software defined infrastructure and runtime environments, Ability to quickly clone and create sandbox environments for test/dev, Simultaneous support for a range of hypervisor, container, and cloud environments and open source plug and play components making it real open system, with Native integration with orchestration tools like Kubernetes, Docker, and Mesos. Both sides of the same coin yet one which fits the bill is the use case.

In fact, ESG cites that 38% of IT decision makers believe that better scalability is a reason their organization would deploy converged infrastructure technology over a hyperconverged alternative.

In Conclusion, although we have seen both side of stories the HCI market is strong and they are solving uses cases of many enterprises winning their mindshare due to ease of manageability and Opex reduction, deployment simplification, storage management simplification, and capex reduction are cited as the first four benefits, whereas Hyperscale is termed Lightweight deployments for app dev, provides greater agility, and heterogeneity the key benefits for developer's infrastructure requirements.

Most enterprises need to support digital business, remain competitive, and continue to thrive in a world of disruption. As a result, like it or not, they're undergoing cloud transformation and most likely go the HCI path, where developers are thinking about how quickly they can bring new digital services and apps to market. Exposing programmable, scalable infrastructure to developers is a necessity to achieve this velocity and lean towards hyperscale and enterprises are focused to keep developers happy and productive, let's see which side the coin flips!!